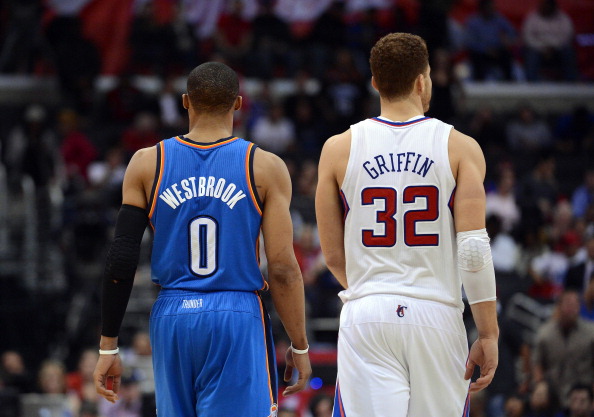 The Oklahoma City Thunder and the L.A Clippers who are fresh from Game 7  victories in their respective 1st round match-ups square off Monday. This series undoubtedly will be the the most offensive series we will see in the semi-finals in both conferences.
The OKC Thunder is led by MVP Kevin Durant and his (robin) Russell Westbrook who are seeking its third trip to the  Western Conference Finals. KD and Westbrook are the most dynamic duo in all the NBA. Their ability to drive to the basket, the ability to finish at the rim & their ability to pass to open shooters makes this team very dangerous. The Thunder faced a defensive minded Grizzles in the 1st round and until this point haven’t faced an offensive juggernaut  like the L.A Clippers thus far.
The L.A Clippers enters the semifinals emotionally and physically drained as the Golden State Warriors gave them all that they can handle. The emotional drain in some way has rejuvenated them…(they answered the bell vs Golden State when their backs were against the wall.). Chris Paul stirs the drink for this Clippers team in which his play has elevated the play of others ( Daren Collison, DeAndre Jordan, Blake Griffin to name a few).
This match-up will in my eye live up to the billing. Both teams are complete teams and loaded with stars. This series will undoubtedly come down to  the role players..Expect this series to last for 2 weeks….it will be a INSTANT CLASSIC!!!

The Clippers Win if: Chris Paul and Blake Griffin defend the OKC Duo & Can Jamaal Crawford and the bench provide timely scoring when CP3 and the starters have a off shooting night.

The Thunder Win if:Kevin Durant dominate in MVP fashion..Establish himself as top dog. The Thuder also will need huge contibu